Social auditing is a process by which an organizations/government undergo for a impact realization of its work by its stakeholders and take measures to improve its social performance. Social audit as a concept was envisaged by Charles Medawar in 1972. 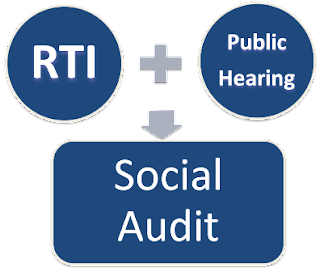 A social audit on at ground level helps to narrow down the gaps between what is envisioned and what is outcome in reality. It helps the government to take citizen friendly measures, to improve the social performance of any welfare government efforts.
Social Auditing is quite different from the developmental auditing. While the social audit focuses the on-ground neglected issue and is citizen-centric, the developmental audit has a broader vision which aims towards higher GDP growth along with welfare programs. Development audit is concerned with ‘efficiency’ while the social audit is concerned with ‘effectiveness’.

Social audit were voluntarily carried out by the RTI activists, the RTI mechanism is limited and also consumes too much time. Thus dedicated Social Audit mechanism was required to empower the beneficiaries of government intensities to provide a first hand audit report about the effectiveness of the initiative.
Social audits were first made statutory in a 2005 Rural Employment Act and later under the MGNREGA Act government issued the Social Audit Rules in 2011.

Some Important Facts about Social Audit:

It is largely believed that the Gram Sabha is the most appropriate institutional level for social audit following the bottom up approach. A Social Audit portal is required to collect the reports of the findings of the Social Audit exercise and pass it to the Policy formulators to improvise.
Meghalaya became first state in India to implement ‘ The Meghalaya (Community Participation and Public Services) Social Audit Act, 2017’, as law that makes social audit of government schemes and programmes as part of governance.

Know About The Exam

“Faith is the bird that feels the light when the dawn is still dark.“

We use cookies on our website to give you the most relevant experience by remembering your preferences and repeat visits. By clicking “Accept All”, you consent to the use of ALL the cookies. However, you may visit "Cookie Settings" to provide a controlled consent.
Cookie SettingsAccept All
Manage consent

This website uses cookies to improve your experience while you navigate through the website. Out of these, the cookies that are categorized as necessary are stored on your browser as they are essential for the working of basic functionalities of the website. We also use third-party cookies that help us analyze and understand how you use this website. These cookies will be stored in your browser only with your consent. You also have the option to opt-out of these cookies. But opting out of some of these cookies may affect your browsing experience.
Necessary Always Enabled
Necessary cookies are absolutely essential for the website to function properly. This category only includes cookies that ensures basic functionalities and security features of the website. These cookies do not store any personal information.
Non-necessary
Any cookies that may not be particularly necessary for the website to function and is used specifically to collect user personal data via analytics, ads, other embedded contents are termed as non-necessary cookies. It is mandatory to procure user consent prior to running these cookies on your website.
SAVE & ACCEPT